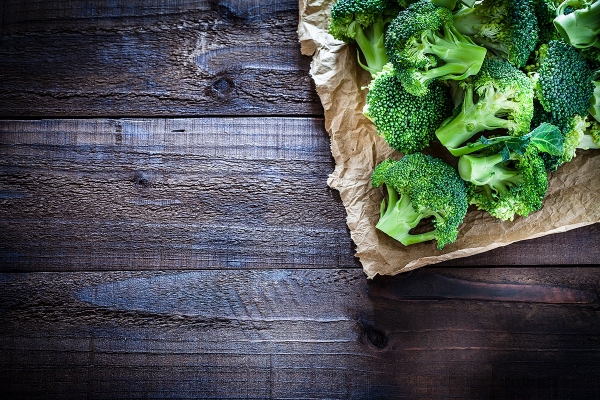 Is Broccoli Really a Superfood?

Most people when they hear ‘eat your broccoli’ may think of it as being just one of the government’s recommended ‘5-a-day’ fruit and vegetables (1) and that they know it's important to eat your greens. Some may think of the overcooked, soft broccoli they endured with their school meals?

So…. Does it matter what vegetables we eat or how we prepare them, as long as we eat some? Are there any that stand out that may be more advantageous for protecting our health?

Research into the possible health benefits of broccoli and other cruciferous vegetables is now starting to support the long-held practice of eating broccoli or its ancestors.

How long have we been eating broccoli?

Evidence of eating broccoli or its ancestral forms have been dated back to Roman times (2) and some have suggested that evidence exists that we have been eating ancestral forms dating back to approximately 6000 BC (3). Broccoli is a member of the cruciferous family, with well known ‘cousins’ such as kale, brussels sprouts, cauliflower, cabbage, along with lesser-known ‘cousins’ including Chinese cabbage and pak-choi (4).

Wild broccoli, brassica oleracea, has over time, been cultivated into different forms of cruciferous vegetables we know today (5). Today’s, broccoli has its origins from Italy from the 19th and 20th century, with Braccium from the Latin, meaning ‘arm’ (2).

So, with a long history and current interest in research, let’s take a look:

Firstly, broccoli is packed with nutrients and is also low in calories, so we can say ‘broccoli is a low calorie, nutrient-dense food’. It has lots of similar good nutrients that many healthy green vegetables may have. Nutrients such as magnesium, potassium, zinc, iron, selenium and is also packed with vitamins such as vitamin C and vitamin E, vitamin K, together with B vitamins such as Folate (aka. Folic Acid), vitamin B6, antioxidants such as lutein and other carotenoids, and is also a really good source of fibre too (2).

So, what makes broccoli stand out above some of the others?

Well, broccoli is also a sulphur-containing vegetable, with compounds called glucosinolates and other sulphur compounds. These have been found to produce many bioactive compounds with interesting and potentially health-promoting properties. Some of these bioactive compounds include things called indoles and isothiocyanates and sulforaphane. Compounds which have been researched more and more to investigate their potential heal properties.

What’s the evidence for health benefits so far?

Research has found associations between the consumption of broccoli (and other brassicas), with a reduced risk of the occurrence of some chronic diseases, such as cancer, cardiovascular disease, cataracts, and other age-related conditions.

Many of these conditions have been found to share some common risk factors such as oxidative damage from highly reactive molecules called free radicals, that can react and disrupt healthy cells and molecules, fats and potentially damage our DNA, which then can contribute to further damage and ill health over time.

Although the development of cancer is a complex process, regular consumption of broccoli and other cruciferous vegetables has been associated in epidemiological studies with reduced risks for some cancers, including breast cancer, prostate cancer etc (6). The isothiocyanates have seen particular attention as potential anti-carcinogenic in its properties, and it was concluded in the summary
for one study concluded that there was enhanced cancer protection by consuming cruciferous vegetables including broccoli than a diet focused on more generalised fruit and vegetables (6).

Detoxification has become an ‘common term’ with detox smoothies, detox tea, detox fasts etc. There is a big movement on the internet with this trend (7). But, is there scientific evidence to support the claims of detoxification properties of broccoli? So first, what is the definition of detoxification in the context of our body. It has been described as the mobilization and elimination of toxicants, which includes our redundant hormones, through changing their structure, or ‘biotransformation’ through a 2-stage process (8).

Of the bioactive compounds investigated from broccoli include Isothiocyanates, Indol-3-carbinol, and sulforaphane, which between them can positively influence the physiological stages of detoxification, a process which principally occurs in the liver. In many cases, the ‘phase 1’ detox process produces more damaging, pro-carcinogenic, and oxidation damaging compounds, and the ‘phase 2’ transforms these to safer waste product which the body can the excrete and get rid of. These special bioactive compounds support more advantageous phase 1 processes and also supports the phase 2 processes helping to protect the body from damaging products. Selenium, in broccoli, is although thought to contribute to cancer protection, although scientists are discovering how this works exactly (6). Research has also found that the ability to affect these processes may even help enhance caffeine metabolism too (10).

When oestrogen is metabolized from the body, there are healthier ways it can do this or unhealthier, more pro-carcinogenic, DNA damaging and oxidation damaging ways. And yes, men have oestrogen too, especially if men are carrying more fat, as molecules from fat cells are able to convert testosterone to oestrogen. The good news is that research has found that these bioactive compounds, such as the Isothiocyanates and Indol-3-carbinols help to support the healthier routes in the removal of oestrogen (11) and therefore may potentially help reduce the risk of damage from the unhealthier routes of detoxification of oestrogen.

Anti-oxidant protection? But what does that mean?

We’ve mentioned oxidative damage, that can arise during detoxification, but it can also happen as a result of many other normal processes in the body, including our energy production. As well as internal sources of ‘oxidation damage’, there are plenty from the outside ranging from toxins we may breathe, or eat including pesticides on our food, but also from damaging UV light too, perhaps things like cataracts on the eye.

Broccoli, as we saw in the nutrients contains antioxidants which act directly against these damaging molecules, such as Vitamin C, vitamin E, and lutein and other carotenoids, plus minerals zinc and selenium which help support our own ‘homegrown’ powerful ‘endogenous’ antioxidants. However, research is finding that the sulphur compounds from broccoli, such as one called sulforaphane, really helps to promote the internal production of these powerful internal antioxidants, which are being found to be crucial for our internal protection oxidation damage (12) (13).

Recent research in the lab concluded that sulforaphane containing foods, which includes broccoli and a good source, may possibly contribute to delaying the onset of cataracts, but it is early days to say definitively (14) (15). However, other studies have found that antioxidants such as lutein, and other carotenoid, contained in broccoli, have been found to offer cataract protection in a nurses health study (16) .

Any other research evidence

Other areas of health that research has shown promise in CVD risk reduction suspected to be through the combination of nutrients in cruciferous vegetables such as broccoli (17). A recent population study observed stronger long-term correlations of beneficial weight management with higher consumption of high fibre/low glycaemic, (low sugar-producing) foods such as broccoli, when compared to lower fibre, higher glycaemic (higher sugar-producing) foods, such as cabbage or carrots (18)

So, can we have too much of a good thing?

What do we need to watch out for and are there any people who need to be really cautious or concerned about eating lots of broccoli? Yes, for some people. People who suffer from allergies such as Grass seed, dust mites, pollen, dogs / cats, fruits / nuts/ asthma, skin conditions such as eczema, dermatitis, may have what are known as atopic allergy, and these people sometimes find higher intakes harder to tolerate (19).

Broccoli contains something called goitrogens, which in high quantities may adversely affect the function of the thyroid glands, however, those who suffer from lower thyroid function or ‘Hypothyroid conditions’ will need to seek guidance, and moderate the amount consumed. Indications from thyroid specialist practitioners are that small portions of cooked broccoli are usually ok, rather than raw (20) (21)
People taking Warfarin need to discuss their intake with their GP, as the higher levels of vitamin K content can affect the action of the medication. Research has that when significant quantities, such as 450g per day were eaten, health issues arose. A safer approach is to consult with your GP and keep them informed (19).

Finally, there is reference for symptoms of bowel discomfort, bloating and flatulence if too much broccoli is eaten. Also because of the higher sulphur content, flatulence may have that hydrogen-sulphide smell, of rotten eggs branch (22).

Does it matter how we prepare it and eat it?

Research has found that food preparation and also the body's gut bacteria, affects the availability of these important bioactive compounds from broccoli (6).

The greenness of the broccoli is important too, reflecting the chlorophyll content, the greener broccoli was found to have importance for the final nutrient quality of the vegetable (23). Of the various different cooking methods available, which included boiling, microwaving, stir-frying/boiling or steaming, research concluded that domestic preparation methods can significantly affect the final nutrient availability and that overall steam cooking was the preferred method (23) (24).

So, Let’s Recap, Is Broccoli really a superfood?

Well, research has suggested that broccoli has some different and perhaps greater beneficial health potential that some of its other green leafy vegetables like spinach and salad and also over other vegetables such as carrots. There is a growing amount of evidence to suggest that there is potentially a risk-reducing benefit to help protect against certain types of cancer, supports detoxification and oestrogen balancing, together with other potential benefits for our cardiovascular health, and overall contributory effect for healthy weight management.

With the cautions, if you are concerned, seek professional advice.

And finally, choose to eat green healthy broccoli, that has been cooked well and certainly consider steaming for best effect according to research findings.

Nigel Fawthrop is a nutritional therapist based in Edinburgh. References available on request.